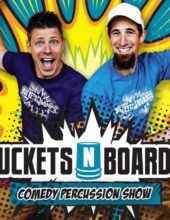 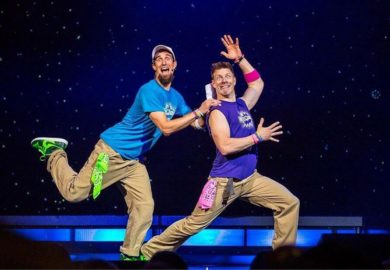 A Musical variety, comedy, and percussion show that will leave audiences of all ages with memories they won’t soon forget, Buckets ‘n Boards provides tons of fun for all ages!

A Musical variety, comedy, and percussion show that will leave audiences of all ages with memories they won’t soon forget, Buckets ‘n Boards provides tons of fun for all ages!

Prepare for the unexpected as you sit down for one of the most unique live entertainment production shows in Branson!

The comedy duo that makes up the cast of Buckets ‘n Boards will have you laughing along with their zany, comedic antics that audiences of all ages have enjoyed!

Whether they’re pounding out percussive rhythms on 55-gallon drums, strumming guitars while serenading you with some silly songs, or dancing around the stage – one thing is certain, you never know what you’re going to see next!

They have performed in various venues and theatres around Branson for more than a decade before teaming up to put on one of the most one-of-a-kind acts to hit the Branson stage. Combining a mixture of music, dancing, and live theatrics – the guys will leave audiences of all ages with smiles on their face during (and after) the show!

Just a few years old, the show has traveled abroad and been taken to cruise ships and concert halls around the world. And now, for a few months out of the year they bring their hilarious show to visitors traveling to the Midwest hotspot of Branson, Missouri!

Join Matt & Gareth as they bring you Buckets ‘n Boards – one of the most original and entertaining shows to hit the Branson strip!