Please Note: Based on recommendations and ordinances from local and state authorities (and in an attempt to "flatten the curve" of COVID-19) we have greatly reduced our hours.
Until further notice, we will be open Mon-Fri from 10:00 am - 2:00 pm. 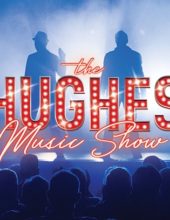 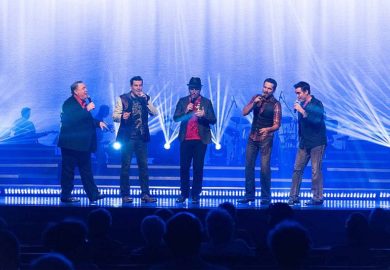 Starring one of the largest performing families in the world! IT is a high-energy show featuring dancing, comedy, music, & more!

"This show is one you don’t want to miss. Your children will love it, too!!!"
– B. Stelding

"If you don’t see this show you will hear about it when you get home. Then you will wish you saw it."
– Steven R.

"You won’t believe how talented this family is. If you go, this is the one show not to miss!"
– Ron & Jerry

Starring one of the largest performing families in the world! IT is a high-energy show featuring dancing, comedy, music, & more!

The “World’s Largest Performing Family” features a cast of more than 45+ entertainers, musicians, singers, and dancers in an all-new variety show presented by the Hughes Brothers known simply as… It!

Seasoned professionals, the group has been performing in various venues and theatres around the world for nearly three decades. What originally began as a small family band with the brothers has grown to become the world’s largest family production, with dozens of family in the cast (and more being added each year!).

For half of the time that they have been putting on shows, they have made Branson their home and celebrate more than a decade of performing in this popular tourist destination.

While the main feature is the brothers’ amazing harmonies and vocal talents, they are surrounded by some of the area’s top entertainers to make a show that is as diverse and creative as it is enjoyable.

Sharing their unbelievable talents with audiences from around the world, the Hughes Brothers and their cast will provide a two-hour show filled with some of the best live entertainment to be seen anywhere. Be serenaded with the boys’ beautiful voices, watch as their wives sing and dance around the stage, smile when the children of the family take the stage, and be impressed with the skillful playing of the instruments by a live band.

Hear music selections that range from country and gospel to rock ‘n roll to Broadway!

The beautiful costumes that adorn the performers are a sight in and of themselves, with the cast making more than 150+ changes throughout the show.

“It” is a variety show in every sense of the word, providing everyone in the audience with something that they will enjoy and appreciate – you will want to See “It,” Hear “It,” Feel “It!”

Giving visitors a great way to save time and money, the Hughes Brothers’ show also offers a meal option for their evening performances.

Beginning at 6:30 pm on the night of each performance (and served prior to showtime) inside the theatre, it’s a delicious three-course spread that includes:

It’s a meal that would rival any restaurant in the area!