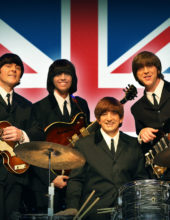 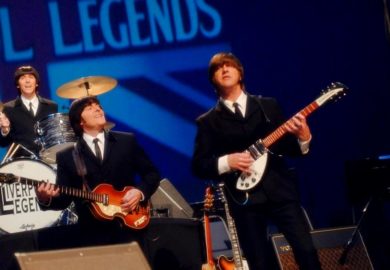 The world’s most amazing Beatles tribute, these four performers bring the music, look, sound, and personalities of the most popular music group the world has ever seen with their unbelievable tribute show!

"Hands down the best show I’ve seen in Branson & believe me I’ve seen em all."
– Mel

"Absolutely the BEST entertainment I have seen..."
– Joe D.

"Seen many shows in Branson and this one tops them all. Loved every minute of it!"
– Robert

The world’s most amazing Beatles tribute, these four performers bring the music, look, sound, and personalities of the most popular music group the world has ever seen with their unbelievable tribute show!

One of the world’s leading Beatles tribute acts, the Liverpool Legends are a hand-selected group of some of the finest entertainers and musicians in the world – who recreate the music, sounds, and personalities of the most famous band of all time!

Without question, there are few acts in the world who such accurately and amazingly bring back the look and sound of The Beatles as the Liverpool Legends have done.

These four performers have faithfully recreated nearly every detail of the group’s members – from their looks and costumes, to their singing and playing their own instruments, to even the personalities of each artists – no detail has been overlooked.

They are so impressive and convincing that you might forget for a moment that you’re not actually seeing the Fab Four themselves!

Sister of the late George Harrison, Louise Harrison has put together a group which features one of the most impressive musical line-ups you will ever see!

Personally choosing each member of the band for their amazing likenesses, it is one of the most remarkable tribute shows of its kind playing anywhere in the world today!

Perhaps the most distinguished honor that the Liverpool Legends (and Louise) hold is their nomination for a Grammy Award in 2012 for their collaboration on a spoken word album entitled “Fab Fan Memories” – which took Louise and a couple members of the group to California to attend the awards show and receive recognition!

In addition to their recognition by some of the most famous music organizations in the world, the group also holds several honors from local publications including “Best Show in Branson,” “Best Band,” and “Best New Show” amongst just a few of the nominations they have won in the Branson area.

John Lennon, Paul McCartney, Ringo Starr, and George Harrison have are all brought back together on-stage for a reunion that any music fan will appreciate.

The group has played some of the most historically-significant concert halls and venues from the Cavern Club (where they had their first shows), to recreating the band’s appearance at Busch Stadium, to the stage of Carnegie Hall in New York – they have even recorded in the original studio where the group produced so many of their hits… Abbey Road! They have performed alongside some of the most notable figures from John, Paul, George, and Ringo’s lives including original drummer Pete Best and co-founder of Paul McCartney’s later group Wings!

A Fun-Filled Journey Through Their Music!

You will travel along with the four guys as they take you on a musical voyage from the earliest songs and sets in The Beatles’ career to to their revolutionary later albums like “Sgt. Pepper” and “Abbey Road.”

Fun for audiences of all ages, the kids will love the special effects and may even sing along to some of your favorite songs including “Yellow Submarine!”