Tucked away in the heart of the Ozark Mountains, the Branson area offers some of the most incredible cave and cavern tours in the country!

As one of the oldest mountain ranges in the world, the Ozark Mountains offer spectacular views, incredible hiking opportunities, and contain some of the world’s oldest and most intriguing caves and caverns ever created!

Frequently referenced as the “Cave State,” Missouri boasts hundreds of caves throughout the state – with several of the most beautiful and popular located right in Branson, Missouri!

If you’re looking to take in some of the natural wonders of the Ozarks, then you won’t want to miss these on your next visit! 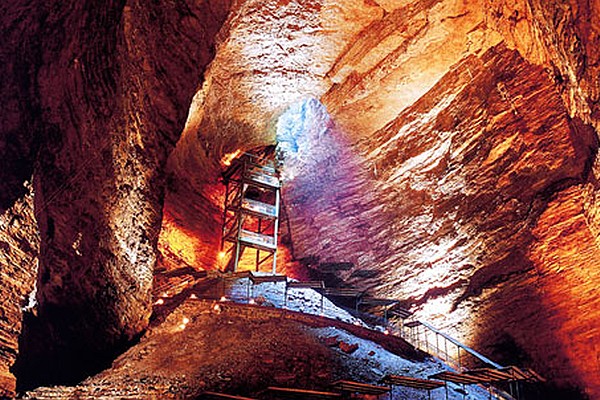 The original attraction that started what would become the world-famous Silver Dollar City, Marvel Cave offers incredible views unlike anything you’ve ever seen – including the largest cave entrance in the United States!

Although in operation as a tourist attraction since 1894, Marvel Cave really garnered worldwide attention when entrepreneurs Hugo & Mary Herschend assumed operations and leased the cave in 1950.

The original attraction around which the famous Silver Dollar City theme park was built, the Herschend family would transform the cave and new amusement park into one of the most visited attractions in the state of Missouri!

Free to visitors of the theme park, Marvel Cave offers some spectacular views and one-of-a-kind caverns!

Boasting the largest cave entrance in the United States, the 300′ tall Cathedral Room welcomes you on a one-hour cave tour through a half-mile of rooms and caverns.

You’ll learn about the history of the area while being taken on a guided tour through the remarkable cave.

In addition to the regular cave tours, Marvel Cave also hosts one-of-a-kind lantern tours (that varies between 4:30 pm and 5:30 pm by season), giving you an unforgettable caving experience! 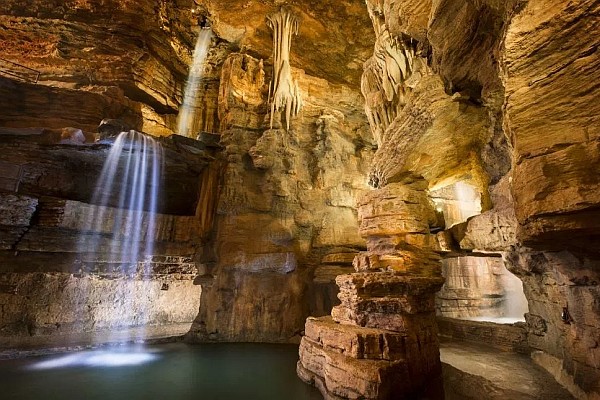 The Lost Canyon Cave & Nature Trail at Top of the Rock is one of the most breathtaking and incredible tours of the Ozarks found anywhere.

Located at the breathtaking Top of the Rock, Lost Canyon Cave & Nature Trail is one of the most remarkable and beautiful tours of the Ozarks to be experienced anywhere!

For nearly a decade, Bass Pro Shops founder Johnny Morris has been creating one of the world’s most incredible destinations at his Top of the Rock and Big Cedar properties just a few minutes south of Branson.

With award-winning golf courses, restaurants, activities, and attractions – it’s a truly world-class destination unto itself.

The Lost Canyon Cave & Nature Trail gives you unmatched access and views of the Ozarks – all from the comfort of your own electric golf cart.

Twisting, winding, and turning alongside the Ozark mountains – these tours take you on a two-and-a-half mile journey through some of the most spectacular sightseeing opportunities anywhere.

View the Lost Canyon Cave, go over an Amish-built bridge, get up-close to a 4-story waterfall (inside the cave), and witness some of the most remarkable scenery you’ll ever have the chance to experience.

If you’re looking for an incredible and unforgettable outdoor activity – this is surely something you won’t want to miss! 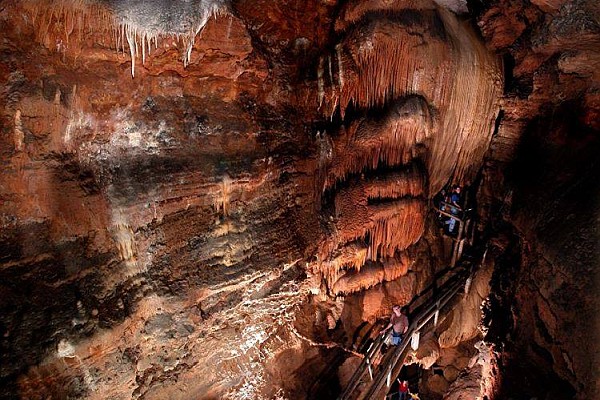 For more than 100+ years visitors have been taking part in the tours of what was once-called “Missouri’s Most Beautiful Cave” – at Talking Rocks Cavern.

One of the most educational tours of its kind in the area, you will learn about the cave’s formation, early history, and the guides will be on-hand to answer and assist with any questions you might have.

You’ll walk through the cavernous rooms and explore a bit of Ozark history as you make your way through the various twists and turns as you take part in tours that have now been going for more than 100+ years!