Dennis Quaid & The Sharks Return to The Mansion Theatre!

Dennis Quad and the Sharks will be performing at the Mansion Theater Saturday, July 28, 2018 at 8:00 pm!

Full disclosure… I’m still star-stuck! I was so excited to see the man that has been in some of mine (and my family’s) favorite movies!

Quaid is well recognized from popular movies such as, “Parent Trap”, “A Dog’s Purpose,” “The Day After Tomorrow,” and many more – an accomplished American actor by any definition… but that’s not all!

Come see the star, and stay for the music!

Born in Houston, Texas – Quaid brings the country roots to his music. Performing a collection of originals that he has written himself, as well as a combination of, rock, country, soul, and many other styles.

In 2000, Harry Dean Stanton was performing – when Dennis was invited on stage.

When Quaid got up on stage to perform, he realized there was an instant connection with the band. Harry (who has now passed), offered to share his band, the Sharks with Quaid.

Stanton was a great friend and teacher and his legacy is able to play on though Dennis Quaid and The Sharks. Dennis has referred to his music as therapeutic and the appreciation and love for what he does can be seen in his eyes and felt through every word when he talks about his music. 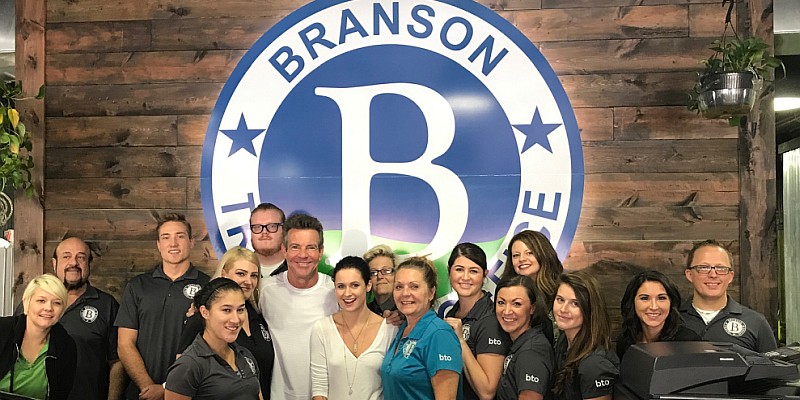 Dennis Quaid stopping by Branson Travel Office – he will be performing at The Mansion Theatre with his band The Sharks on July 28, 2018

First of all, what a nice guy (and handsome too)! He was very casual and easy going, but that didn’t seem to settle my nerves at all.

Knowing other people were also excited, made me feel a little better about my shaking hands and sweaty palms. Butterflies were taking over, when I heard it – “he’s here.”

I nervously paced back and forth trying to look natural (looking anything but natural).

As he walked in pictures were immediately being taken… and who am I kidding, I had my phone reared and ready to go!

He came in wearing blue jeans and a white T-shirt, with a grin from ear to ear. His large personality and charm could be felt from across the room. When a few pictures had been taken, he looked over and said, “any more pictures?.”

This was my time, but I was over thinking everything and I didn’t want to happen to jump forward at the same time as someone else, so I hesitated, looked around, then offered my phone for pictures. I nervously admitted, “you’ll have to take it, I’m shaking.” He snapped three “selfies” and I nervously took the phone away from him – because at this point I realized I had been holding on to him, the way I normally take “selfies” with great friends, locked on tight.

As silly as I felt, I walked away smelling like Dennis Quaid’s cologne, so it was well worth the awkward side hug! When everyone was finished getting pictures we gathered around, and he told us about the show, and I even managed to fit in a question about how he liked Branson.

As we were gathered facing him, he began to explain what the show was like, not just particulars, but the feel, the vibe, the emotion of the show.

The show is a good-time, good-feeling, get out of your seat, and have a great time SHOW – inspired from a wide variety of genres that seem to come together with a bit of a country twang, stemming from his Texas roots! He has been performing for 17 years, and music is truly a passion and Dennis even writes a lot of his own music!

So, he’s a writing, singing, acting, good-looking, charismatic performer – July 28th is going to be a night to remember. A night I am extremely looking forward to!

I have thought all night about things I should have asked him but I was incapable of small talk at the moment with my nerves out of this world. My attempt to rid myself of nervous energy led to me walking around smiling and giggling at any time I could fit in a chuckle without being completely awkward. I was standing to his right side when he was discussing his show.

We also all laughed together about the difference in activity in the evenings between Branson and Sunset Blvd., where he is used to a much more active night life.

There is a real passion behind his eyes when he speaks about his work and performing.

July 28th, when Dennis Quaid and the Sharks come to Branson to perform at The Mansion Theatre, I will be there – and I wouldn’t recommend any one sit this out! The energy we felt getting to meet him is going to be conveyed through his performance, as he promised to give the audience and great time, that they won’t forget.

Watching talented people, doing what they love is inspiring and entertaining.

Dennis Quaid is more than an actor – this talented performer will be rocking the stage with his rugged voice and good looks!

Quaid has been in a band for YEARS our of sheer passion, and Branson is going to have a front row seat on July 28th!