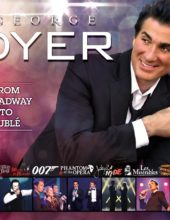 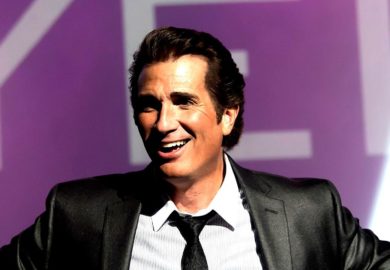 Featuring one of the most amazingly talented vocalists you will ever hear! Hear your favorite songs, hilarious comedy, and some of the most entertaining two hours of performances that you will see anywhere!

"We have been to many of his shows and we are never disappointed, this family has great talent."
– Celeste C.

"Enjoyed the show and the whole family. All great performers."
– Mary Ann D.

"We think this is the best pick of all shows in Branson."
– Carol M.

Featuring one of the most amazingly talented vocalists you will ever hear! Hear your favorite songs, hilarious comedy, and some of the most entertaining two hours of performances that you will see anywhere!

With his powerful vocals and stage presence, it has been said that George Dyer is one of the top tenors in the world!

A dynamic and charismatic performer in every sense of the word, he delivers a professional show that would rival acts in Las Vegas, Broadway, or any of the finest entertainment venues in the world!

His introduction to show business began with his remarkable performance in the New York City Opera, where his unrivaled vocal abilities would earn him worldwide acclaim and recognition.

Continuing to capitalize on his talents, he would go on to become a featured soloist for several concerts with the Mormon Tabernacle Choir including one event that was internationally broadcast to more than 60+ countries around the world!

In addition to his appearances in theatrical and musical productions, he has competed for the top prize or come in as a finalist in many auditions including the Marion Anderson Vocal Competition, San Francisco Merola Program, and even the Metropolitan Opera.

His tours have taken him around the world to perform in off-Broadway shows, ballets, operas, and as a featured performer on many nationally (and internationally) syndicated programs – sharing his beautiful voice with millions of people in the process.

A brand new addition to the show is the special feature for the young and young at heart as George presents some of the songs of the most popular animated films of all time in a special Disney song segment that features the music from: Moana, Beauty & the Beast, Pocahontas, and Frozen!

Music Variety Unlike Any Other!

While his extensive background in operatic endeavors are some of the highlights of his career, his show incorporates a wide variety of music styles and genres. Almost no type of music or song is off-limits as he explores everything from love ballads, gospel music, show tunes, and even today’s modern artists like Michael Buble!

Joining him on-stage are some of his family (also incredibly talented in their own right) who will share in creating some of the most moving and inspirational music you may ever hear.

Backing up the vocals of George and the rest of the cast of singers is one of the most accomplished and recognized bands in Branson. These professional musicians have toured the world with acts from Andy Williams to Tony Orlando.