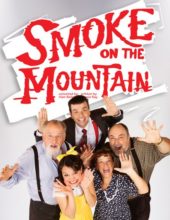 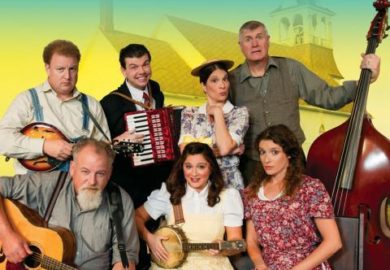 An off-Broadway show that combines music, comedy, and LIVE actors in a production that is unlike anything you have ever seen in Branson!

"Hilarious!! Lots of good laughs! I highly recommend you become a part of this Branson show."
– Roxana B.

"...so much more than I expected. We had a blast and laughed till our stomachs hurt."
– Sharon Y.

An off-Broadway show that combines music, comedy, and LIVE actors in a production that is unlike anything you have ever seen in Branson!

Remarkably popular and highly requested, Smoke on the Mountain has become one of the area’s premiere shows for live entertainment featuring gospel music, comedy, and theatrics – all combined into one of the most entertaining productions to be found in Branson!

More than just a music show, the storyline is set in the heart of North Carolina in 1938 – following the Sanders Family as the entertain you on the way to their performance at the Sunday Night Gospel Sing-Off at Mount Pleasant Baptist Church.

Along the way, the family will share more than 30+ of your favorite gospel songs from the era, ones that helped shape the future of gospel music as we know it.

This wholesome and family-friendly show will share with its audience some clean fun and some of the most uplifting and spiritual songs of our time. You will hear some of your favorite music portrayed in a most unusual, yet highly entertaining manner.

Laugh along with the crazy characters as they share their trials, tribulations, humiliations, and comedic antics that audiences of all ages will love!

Esteemed writer Connie Ray put Allen Bailey’s idea on paper to create a fantastic production that perfectly blends comedy, acting, and music into a show that now has fans around the world.

With a spectacular run at Lamb’s Theatre in New York, this off-Broadway show has made its home in the Midwest where the millions of visitors to Branson, Missouri can enjoy it year-round!

16 reviews for Smoke on the Mountain