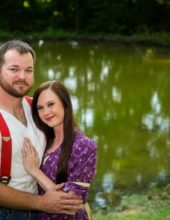 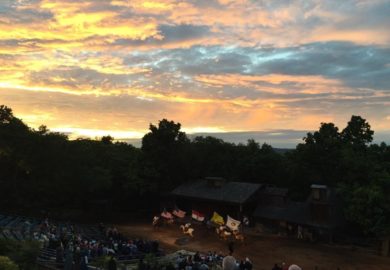 An outdoor drama and LIVE production that is unrivaled, the Shepherd of the Hills is brought to life in the heart of the Ozark Mountains!

"It was a most entertaining performance and we will see it again when we return."
– Steve S.

"I would recommend this show HIGHLY to anyone, for any amount of money."
– Kristen

An outdoor drama and LIVE production that is unrivaled, the Shepherd of the Hills is brought to life in the heart of the Ozark Mountains!

Recreating the famous 1907 novel by beloved author Harold Bell Wright – the Shepherd of the Hills Outdoor play brings the drama, heartache, love, and inspiring story to life each night with a cast of more than three dozen performers.

A Story of Drama, Love, & Inspiration

Based in the heart of the Ozark Mountains, Harold Bell Wright’s timeless novel shares a story (now more than a hundred years old) that involves the people of the Ozarks and is set against the famous mountains and forests of the area.

The story shares heartache, love, betrayal, justice, and inspiration – in a story that would become one of the most popularly and wide-read books of its kind.

With several movies (including the most famous of which starred legendary actor John Wayne), and multiple recreations of the story – the show in Branson, Missouri brings one of the most amazing stories of our time to new generations of audiences each year.

An Outdoor Drama of Unmatched Production!

Since 1960, the show has been performing for audiences in Branson, Missouri – in the hills where Harold Bell Wright actually wrote the novel more than a century ago.

A cast of dozens of performers brings to life the characters as more than 40 actors and performers take the stage, live animals take part in the show (including sheep, horses, and more), an original 1908 DeWitt car, and a real-life burning cabin!

Audiences are seated in a comfortable outdoor amphitheater that allows for a one-of-a-kind show-going experience unmatched by any other production in the country!

More than 50+ Years of Performances!

Millions of people from around the world have had the chance to experience this once-in-a-lifetime production! Running continuously for more than half a century, it shares the lives, trials, and tribulations of the Ozarks’ and its rich cultural history.

Watch as the captivating story unfolds in front of you as you witness history once again in the making, with one of the most intriguing tales of our time recreated LIVE in the hills of the Ozarks each night!

LIVE on Stage in the Heart of the Ozark Mountains!

A family-fun (and friendly) show that helped build Branson, MO into the tourist mecca it is today – the Shepherd of the Hills is one show you won’t want to miss on your next visit to the area!

17 reviews for Shepherd of the Hills